Ironically enough, in balancing his attention between everyone on the team, Belman offers deeper, uncommonly intimate insight into the film's marquee name; one is a witness what is perhaps James's most critical, formative period through the eyes of those who not only knew him best, but had a huge hand in shaping the superstar "King James" so familiar to sports fans today. But if lifting-oneself-from-a-hard-knock-childhood-through-big-dreams is fairly commonplace film fodder, More Than a Game 's trump card comes in an arc that is not as commonly told and even more empowering: the story of Coach Dru , as the film is just as much about him coming into his own.

If James's story confirms the prevailing contemporary notion that one's opportunity for success comes--and then passes--only while one is young, that of the elder Dru counters that, rather poignantly proving that one does not have to settle for comfort and complacency, for one's true calling and self-actualization may not arrive until later in life. That statement may make More Than a Game sound pretentious, but such weightier ideas are delivered in a very accessible and entertaining package.

The Fab Five make an affable and appealing, funny and fun group, and Belman accordingly has fun, fighting the trap of talking head-and-news-clip documentary monotony and keeping the film visually dynamic. Beyond some snazzy but not overdone graphic work that gives the documentary staples of old photos and newspaper headlines some motion and flair, Belman also manages to lend some variety to the basketball footage, with each pivotal game edited and presented in their own subtly distinct way; for instance, some visual repetitiveness is avoided by simply not shooting scoreboards in the same way.

More Than a Game

Belman even has a little fun with the standard closing "where are they now" text cards without resorting to overwrought editorializing or labored stabs at profundity. While it certainly helps to be familiar with the game of basketball and a fan of the sport to enjoy More Than a Game , it is far from necessary. Basketball is what brought the Fab Five and Coach Dru together and was and remains a shared passion, but the game is almost incidental to the larger idea: not only that those from not exactly the most privileged of backgrounds can indeed dream and succeed, but that one doesn't necessarily do it by oneself.

Not looking out for number one but instead always looking out for each other is what made Coach Dru and the Fab Five what they were as a team, who they have become as people today--and why their story and this film are so richly moving and inspirational. Check out Mr. Brown's Movie Merchandise. 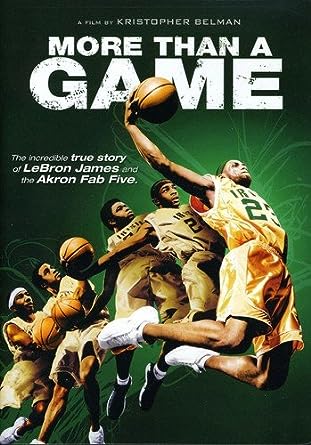 They polished theirs talents while playing in tough conditions like falling on glass or getting knocked down on the hard pavement. Years before, kids played a number of sports, but in the early 90s when this documentary was filmed, it seemed like the focus was only on basketball. According to those who grew up in the city, if there was one thing you learned to appreciate it was your basketball court. Kids would spend their hard earned summer money on buying nets and rims for their local court. Once on the court, these young men became totally different persons.


They could have just walked out of a restaurant together, but once they got picked for opposite teams, the friendship was put on hold and they waged war against each other until the game was over because losing was just unacceptable. Old timers remember that before there was a lot of honor involved in playground basketball, which led to a lot of respect for one another. The game was a matter of survival and of escaping the harsh realities they had to face everyday.

In this documentary, Rebounds, we follow the careers of two basketball players who have been humbled after receiving the news that they have not made it to the NBA. In order to survive, sometimes you need to remember what your ancestors taught you. This is especially true if you live in a place like Toksook Bay, Alaska where the total population is less than The word griot is a noun that means a member of a class of traveling poets, musicians and storytellers who maintain a tradition of oral history in parts of West Africa.

This film tells the story of one of the most popular video games of all times, Minecraft. Tell us what you think. Please upgrade your browser. See next articles.

More Than Just A Game

Newsletter Sign Up Continue reading the main story Please verify you're not a robot by clicking the box. Invalid email address. Please re-enter. You must select a newsletter to subscribe to. Sign Up. You will receive emails containing news content , updates and promotions from The New York Times. You may opt-out at any time. You agree to receive occasional updates and special offers for The New York Times's products and services.

Thank you for subscribing. An error has occurred.